Following my intro post to Future Decoded AR/VR track here is the session information (see https://futuredecoded.microsoft.com/technical-day/ for updates and further information). A huge thanks to VISR VR and Vuforia.

Come and learn from designers and developers at VISR how you can embrace Virtual Reality technology for both entertainment and serious business use. HoloLens: The Path to Mixed Reality

Abstract: Microsoft HoloLens is the first fully self-contained holographic computer running Windows 10. It is completely self-contained–no wires, phones, or connection to a PC needed. Microsoft HoloLens allows you to place holograms in your physical environment and provides a new way to see your world. This session provides a mixed reality primer and an overview of the available tools & documentation to quick start your holographic application development.

Pete Daukintis is a technical evangelist for Microsoft based in the UK. Having started out in 3D Graphics Pete has since made a return to this field of software coincident with the resurgence of the various alternative ‘realities’.

Currently engaging with the tech community and working on projects using this tech with one eye focused on the future. (I’m into Virtual Reality, Augmented Reality, Mixed Reality, HoloLens, More Personal Computing) Introducing the Vuforia SDK and building an App for HoloLens

Abstract: Vuforia™, the leading Augmented Reality (AR) platform, supports smartphones, tablets and digital eyewear including VR viewers and optical see-through devices. Supported VR viewers include View-Master, Merge VR Goggles and Zeiss VR ONE. Optical see-thru devices supported include the ODG R-7 and Microsoft HoloLens. In this session, Andi Everitt will provide an introduction to the Vuforia SDK along with a technical tutorial on how to build a Vuforia™ app for HoloLens.

Andi is one of the software engineering leads working in the Vuforia SDK team at PTC where he leads Vuforia support for digital eyewear.

He has been working on mobile applications for 15 years and has experienced the rapid development of mobile device capabilities. He began working on augmented reality for digital eyewear in 2011 as part of a research team aiming to unleash digital content from the confines of the small screen. As part of the Vuforia SDK team Andi is excited to see augmented reality breaking into the mainstream. 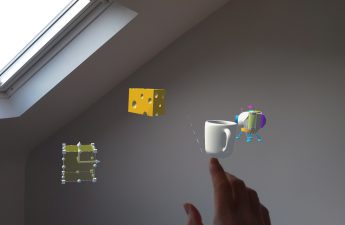